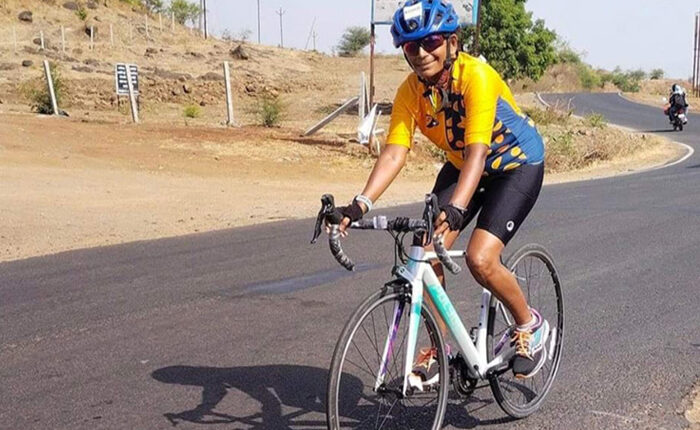 Preeti Maske, a 45-year-old female cyclist from Pune is all set to attempt another Guinness world record from Leh to Manali 480 km in 60 hours. This is at 3600 meters (above sea level) high altitude gruesome attempt by the very first women cyclist.

The climb on the passes of various peaks will be a total elevation gain of 8000 meters from Leh to Manali. In other words, she will be almost equal to climbing Mount Everest (8448 meters).

At one stage of Preeti’s life, her whole life changed due to illness, but she did not waver from it. Instead, she decided to overcome the illness and started cycling as a way to stay healthy and as a form of exercise. Over time, her passion for cycling became obsessive and she gradually climbed to the top of the new record. Now with new hope, they are setting out to set a new world record.

Preeti has been cycling for the last six years. Her health had deteriorated a few years ago. To overcome her illness, she started cycling and running in 2017. After that, she developed a passion for cycling, and from that, she started traveling to different places all over India. Now Preeti will complete the 480 km journey from Leh to Manali by bicycle in 60 to 70 hours. For this, they will leave Pune for Leh on June 13.

Preeti informed that “The most challenging part of Leh-Manali is sleep deprivation and the second challenge will be to manage extreme low temperatures. We are constantly checking the temperatures of Leh and Manali. It is -5C to -10C.”

“I will be mostly on a high protein liquid diet for quick & continuous energy replenishment, it becomes tougher for a vegetarian like me”, added Preeti.

Preeti’s cycling journey will start on June 22 and will be recorded globally. According to the information, Preeti will dedicate the ‘Leh to Manali’ cycle journey to the Border Road Organization. Preeti will be fully dependent on her crew of 6 people to support her nutrition and hydration in a continuous ride with a break of a max of 2-3 hours in 24 clock hours.

Preeti said, “I was very ill between 2015 and 2017. To get out of it, I started cycling in February 2017. In December 2019, 19 cyclists from all over the country were selected for the ‘Kashmir to Kanyakumari’ cycle journey (3,773 km), including me. This is how the journey continues after that.”

“One has to play at least one sport in their lives. The joy that comes from it is indescribable. The transformation from a mere passion for the sport to a source of income is unspeakable. Not only will hobbies and sports become a business for everyone, but the satisfaction that comes from it will be fundamental,” she added further.

Preeti has several records in her name. The last was from Srinagar-Leh-Khardungla; she completed it in 5 days last year. Preeti also holds the record for fastest women cyclist on Golden Quadrilateral (6000 km) for the route Pune- Chennai – Kolkata- Delhi – Mumbai – Pune, and Kashmir to Kanyakumari (4500 km).