To support the campaign visit https://www.akshayapatra.org/pledgetonourish before September 30th 2018.

Bengaluru, 14 September 2018: Joining the country in observing the National Nutrition Month, The Akshaya Patra Foundation has started an Outreach Campaign on the critical cause of addressing hunger and malnutrition. As a part of this campaign, conscientious citizens are being encouraged to sign pledge cards committing to ‘no wastage of food’ and support under-served people by feeding them.

The signed pledge-cards will be sent to the Prime Minister’s Office to express the collective commitment and request the Hon’ble Prime Minister to take up the topic, ‘ensuring access to nutrition for all’ in the upcoming ‘Mann ki Baat.’ 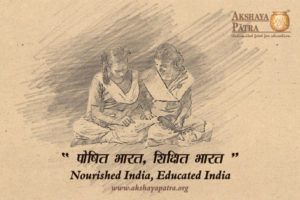 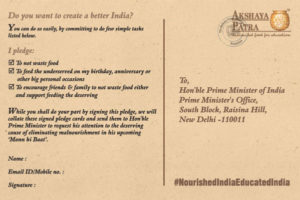 The objective of the campaign is to spread awareness and create tangible action by involving thousands of people and critical stakeholders in the public and private sectors, in our movement against hunger and malnutrition (hidden hunger) on the occasion of National Nutrition Month. The campaign has found support from varied sections of society, ranging from private and Government schools, teachers, corporates, bureaucracy, and political leaders. As of now, over 15,000 signed pledge cards have been sent to the office of Hon’ble Prime Minister. We are reaching out to more supporters for this campaign.

About The Akshaya Patra Foundation 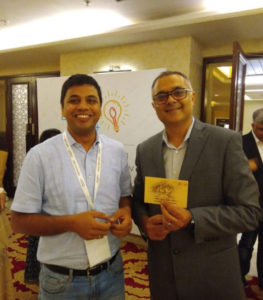 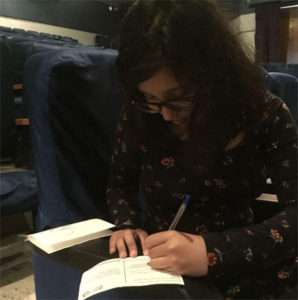 The Akshaya Patra Foundation is a not-for-profit organisation headquartered in Bengaluru, India, which strives to address issues like hunger and malnutrition in the country. By implementing the Mid-Day Meal Scheme in Government and Government-aided schools, Akshaya Patra aims to fight hunger and at the same time, bring children to school. Since 2000, Akshaya Patra has worked towards reaching out to children with wholesome food on every single school day. The Foundation is continuously leveraging technology to cater to millions of children. Its state-of-the-art kitchens have become a subject of study and attract curious visitors from around the world.

In partnership with the Government of India and various State Governments, and the inestimable support of many philanthropic donors and well-wishers, Akshaya Patra has grown from humble beginnings serving just 1,500 school children across five schools. Today, it is the world’s largest (not-for-profit run) mid-day meal programme, serving wholesome food to over 1.7 million children from 14,264 schools across 12 states in India.

Celebrate 20 Years of Impresario Handmade Restaurants with #eats and #drinks at Rs.20