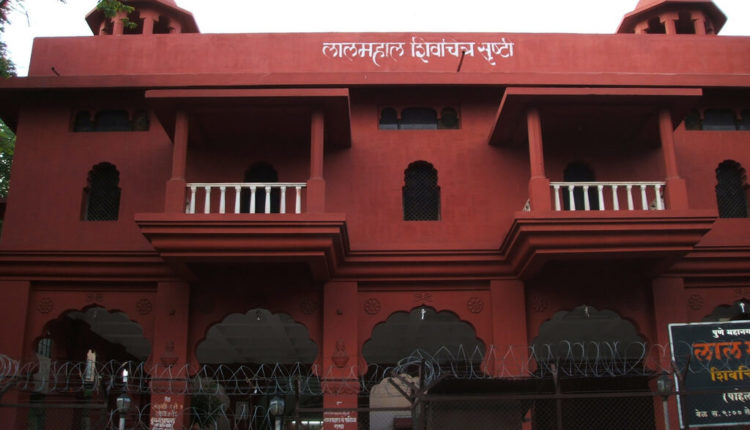 Shivaji’s father Shahaji who was a Sardar in the Bijapur Sultanat, was given territories in Pune. At that time he was residing in Bangalore. He decided to send his wife Jijabai and his son Shivaji to Pune. In 1636 AD for their residence he built a palace for them, to which he named Lal Mahal. Shivaji stayed here for many years until he conquered his first fort.
Lal Mahal was renovated by Pune Municipal Corporation in 1988.

It is a red brick structure standing very prominently in the heart of the city. There is a statue of “Jijamata” ( Shivaji’s Mother ). There is the impressive representation, showing young Shivaji plowing the land with a golden plough, with mother Jijabai and Guru Dadoji Konddev looking at him. This place is just next to Shaniwarwada. Four Umbrellas on terrace is the attraction of the Mahal. This is the same place where Shivaji Maharaj cut Shaistekhan’s fingers when he was trying to run away from one of the windows of the Lal Mahal. Pictorial representation of incidents from Shivaji Maharaja’s life could be seen on the walls of this palace. Jijamata Garden has also been made in this place. Kids senior citizens spend their evenings happily here.